“GivingTuesday is a global generosity movement unleashing the power of people and organizations to transform their communities and the world on December 1, 2020, and every day.

It was created in 2012 as a simple idea: a day that encourages people to do good. Over the past seven years, this idea has grown into a global movement that inspires hundreds of millions of people to give, collaborate, and celebrate generosity.”

The estimated results for Giving Tuesday 2019 are in. 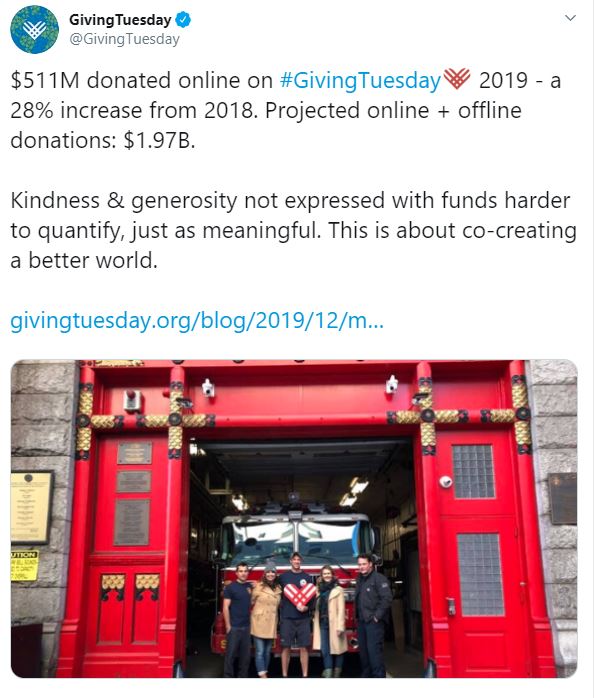 Estimated giving of $2B, with $511M coming from online donations.

Facebook is reporting $120M raised on their platform with 1.1M people creating fundraisers or donating.

This has to give us pause, make us sit up and take notice and celebrate the results.

Any movement that generates this kind of support for missions and causes is worthy of celebration and applauding as a viable and important fundraising activity.

It is, indeed, a global movement.

But It Has Its Detractors

And I’m one of them.  I was honored and pleased to participate in a Giving Tuesday chat with the Four Fundraisers.  And we weren’t the only ones.

While I can’t speak for everyone, there’s not a Giving Tuesday detractor alive who has a fundamental issue with the philosophy of the day or the movement.  In fact, we celebrate it and believe in it.  We live it.  Every day.

And that’s what we’re reacting to when we rail against GT – how it’s executed and interpreted en masse.

Clearly it works because it raises significant dollars.  Clearly it resonates with communities and individuals around the globe.

But a lot of orgs – and I watched several very closely – throw all their eggs in the Giving Tuesday basket and neglect good, solid, donor-centered fundraising the rest of the year.  The endless barrage of emails, the constant social posts and, in particular, using Giving Tuesday itself – or a fabricated match – as the case for giving.

Because we know if we put this kind of energy, attention and focus into solid, year-round, donor-centered, integrated, multi-channel fundraising, we could be raising this kind of money all the time.

The staunch supporters of Giving Tuesday claim that this is the way donors want to give so we should respect that.

I wish I could believe that, I do.

But I don’t think we can assume this is what donors want when they haven’t been asked in any other way.  They haven’t been stewarded, cultivated and encouraged to really engage with the organization in a deep philanthropic way.

We need to see the renewal rates and 2nd Gift Conversion Rates on these $2B donors.

I’m willing to bet that next year we have to sink this same level of energy and focus and work again.

But, as fundraisers, our job is REALLY to make EVERY Tuesday a Giving Tuesday.  Or Thursday.  Or late Friday afternoon after work.

It’s Not The Day Or The Movement

Oh my goodness, I think we owe a huge debt of gratitude to the Giving Tuesday founders and team.  Celebrate generosity hard on the heels of Black Friday and Cyber Monday.  Yes!

Any movement that celebrates and encourages giving and kindness and thoughtfulness and the best of humanity is to be encouraged and uplifted and praised.

And let’s fall to our knees in abject awe of the power of humanity to do good by contributing $2B in one day.

That should take our breath away.

But let’s also make Giving Tuesday into excellent fundraising. The kind of fundraising that makes us hold our breath for the sheer awesome, amazing power that philanthropy can do.  Every day.  Every where.  And let’s hold fundraising that can be so, so much better to account – our donors, and our beneficiaries, are counting on us.