We adopted Tucker when he was just 9 weeks old.  How he got to the rescue org, we don’t know, but we do know he was a puppy mill puppy and came to us sick as, well, a dog. 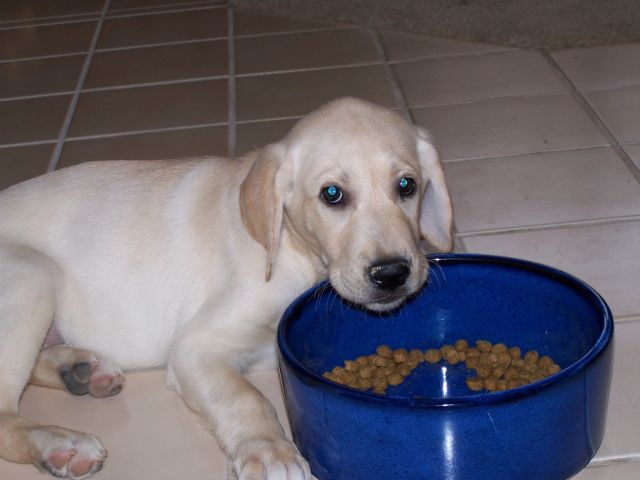 A little under-nourished and a raging case of what the vet called “the Crud” – upper respiratory issues caused, most likely, from being born and spending the first weeks of his life in squalid conditions.  She pointed out the scars on his paws – lines that criss-crossed his paw pads, clearly from growing up in a wire cage.  He was lethargic and not at all acting like a puppy should.

One day we noticed a “Grand Opening” sign at a nearby shopping center – a new pet store!  We stopped in and found far more than a pet store – it was a little house of love.

Their focus was on holistic nutrition for dogs – pet food without additives or chemicals and a whole slew of products designed to give pets the nutrition they really need.

As Tucker grew – and became a boundless source of joy and energy and infuriating mischeviousness that only a Labrador puppy can bring, that store’s market share exploded.

We went through two expansions with them and then their opening of a self dog wash.  We were there at least twice a month.

The owners became friends, we added dogs to the pack, we lost our oldest, we fostered rescues – and every single one of them became a part of the family and community that centered around this one particular store. 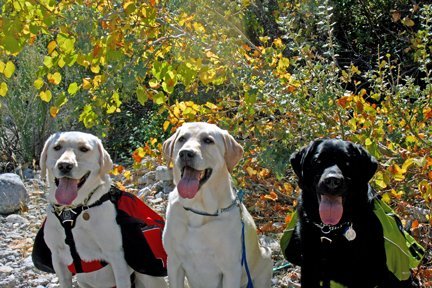 Tucker (in the middle) became the elder statesman of our Trio of Idiots.  Oliver (on the left) came to us with medical issues that stumped the best of vets.

And through it all our friends at the store were part of they pack – they came up with a phenomenal nutrition regime that, along with great veterinary care, kept Oliver, well, alive.  And helped Tucker move into his old age gracefully.

When we lost Tucker to cancer, they put a big picture of his sweet face on the wall in the shop – along with the other dogs who had come through their doors over the years.

We stopped going as frequently, they started to pull back their involvement as their Start-Up had moved to Established Business.  Life just happens that way sometimes.

Last year, our friends sold the store and retired out of state.

We’ve kept going, but not as frequently – maybe 4-5 times a year.  But Tucker’s sweet face remains on the wall, reminding us of happy times.

The last time we were in the store, it just wasn’t the same.  The entire staff is different – we knew no one by face, let alone by name.

But we came in, clearly familiar with the layout.  Definitely comfortable in the space.  And even commented “Oh! You still have Tucker’s picture up.”

Not one recognition or acknowledgement that we were ‘regulars.’  Or had been.  They couldn’t find our “frequent bathers” club card, didn’t engage with us and gave us every impression that it wouldn’t have mattered if we were there or not.

Didn’t even make eye contact, offer a greeting or really engage at all.

They Don’t Know Us

Which got me thinking about donors . . .

High turnover rates for fundraisers have been a top of much discussion.  I’ve seen statistic ranging from the average tenure of a fundraiser being anywhere from 18 months to two years.

So, unless there’s a very strong, established process of donor engagement and renewal, there’s a lot of donors that aren’t hearing from organizations as they go through the cycle of development professionals.

Which means there’s a lot of donors going, “They don’t know me anymore and I was a regular.”

The donors are – and have to be – the continuity that keeps the organization going.  We exist FOR the beneficiary BECAUSE OF the donors.

When turnover happens – and it will – there has to be an established continuity of care for those donors, otherwise we’re reinventing the wheel every single time.

How to Establish Continuity of Care

Meaning, the care of donors – donor-centricity – has to be a core value for the organization and not just thought of as ‘something the fundraiser does.’  Getting thank you notes out on time, reporting on how gifts were used, a standard of renewal asks and engagement of donors on a regular basis.

The systems that support all of this have to be established and regular with redundancies built in.  (More than just the receptionist know how to enter gifts and produce acknowledgements).

But most importantly, acknowledging the critical importance of donors – all donors – and their relationship to the organization has to be an inherent, integrated part of the culture.

Second, Establish a Cycle of Ask-Thank-Report

Ask-Thank-Report-Repeat comes from Steven Screen and Jim Shapiro at Better Fundraising,  Co. , what they call “the Virtuous Cycle.”

It’s relatively self-explanatory – ask a donor, say thank you for their gift, report back on how it was used, repeat the process.

Harder to execute.  It means a lot of stuff has got to be in place – your stories, your impact (that you report on), and your development systems that support the process.

But this IS the process that drives the whole year of fundraising.  The fundraising plan outlines who is doing what and when and with what resources and it’s driven by this simple formula.

This cycle – and the systems and processes that support it – need to be well established and such a part of organizational culture that they can move forward REGARDLESS of who is in the development chair.

Third, Use The CRM.  And Files.

The reason we have donor databases – CRM or DRM (Customer/Donor Relationship Management) – is to not just track gifts and giving history and collect demographic data on donors, but to capture and retain all the potential interactions with donors we have.

In other words – notes.  Every time you talk to a donor, meet with a donor, hear from a donor, think about a donor (ok, that might be extreme), it needs to be entered in the CRM.

Every time you send an appeal, an e-newsletter, a thank you note – it needs to be entered into the CRM.

This is time consuming.  Yes.  It’s worth it.

This needs to be a part of organizational culture and it HAS to come from leadership – from the Executive Director on down.

If your CRM doesn’t have some sort of moves management tracking, the ability to include copies of correspondence (PDFs or emails or anything) or the ability to track appeal codes/campaigns, you’re using the wrong CRM.

The days of “not liking databases” or “being allergic to data” or “I never log in because I don’t know how to use it” are over.

Everyone needs to be held accountable for entering their engagements and ensuring that every possible touch point is recorded.

Donors Last Longer Than Staff – Or They Should

I didn’t expect the new owners of the dog store to know me by sight or have the stories at their fingertips.  But I did expect a warm greeting and that they could find my ‘frequent bathers’ card . . . it’s filed under our last name.  Or it was.

See, they changed the system for “something better” and in doing so, somebody got rid of all the old notes.  Probably not intentional.

But it left us feeling less valued, unwelcome, not needed.

My dog’s picture is on the wall.

My name is in your annual report.

We all want to feel valued, welcomed, needed.  Our job, as fundraisers, is to ensure donors do however long we stay in a gig.